Sailing down into Malampaya Sound

I’ve often sailed in San Francisco Bay and longingly wondered what it must have been like to have been there as an explorer a couple hundred years ago. To see hilltops still covered in trees, untouched beaches, small settlements with inhabitants both excited and apprehensive about visitors.

That chapter of SF bay has long since passed away, but that experience was found as we sailed down to explore Malampaya sound – a large inlet stretching deep into Palawan. We found empty beaches, coves, fairly clear waters and beautiful vistas in the shadow of Mt. Copoas, a 1000m high mountain that is supposedly too dangerous to climb. It was mostly deserted, except for a few small fishing villages dotting the fringes. 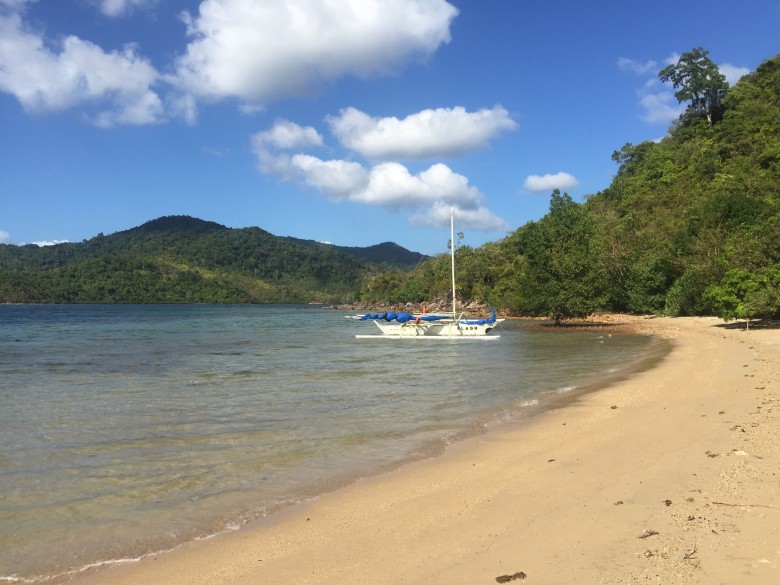 We’ve had our most enjoyable experiences stopping in some of these villages. Even in very rural areas, English is widely understood, and there’s usually a few people around who are comfortable speaking to us in it. Most students not only learn English, but are taught in English, though this rarely translates into being able to talk it with us. Still, they are always very curious, and it’s much easier than in many other Asian countries to hang out with people and get to understand their lives. 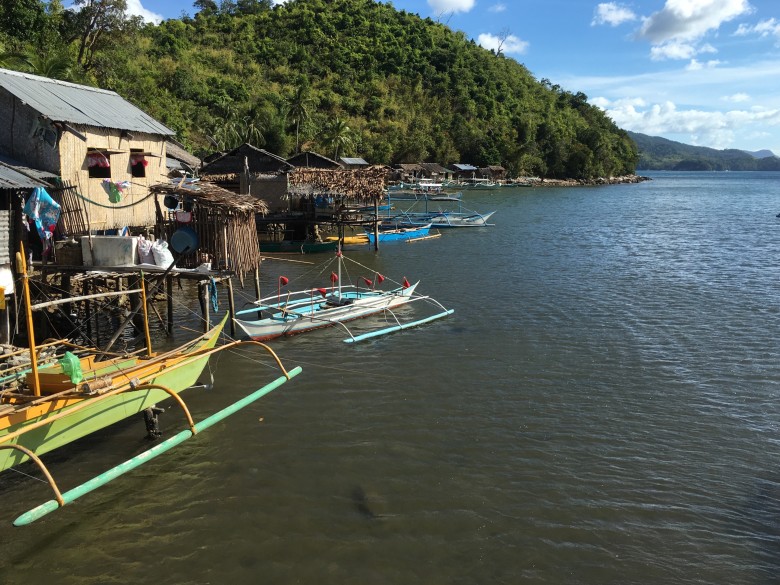 Kiminawit was a particularly special surprise; a small fishing village across the bay from the fishing town of Limancong. We parked the boat on a nearby beach and explored the town at the same time as they were celebrating the village’s 29th anniversary… as judged by the opening of the elementary school. 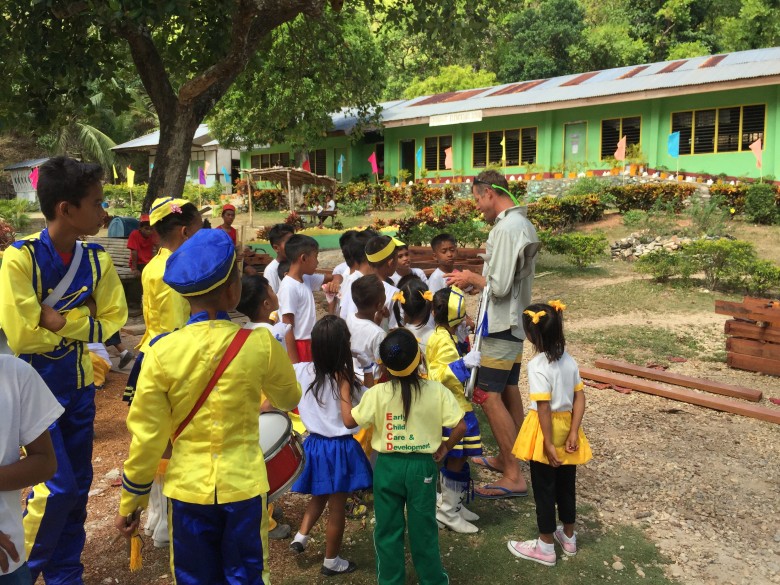 For a village comprised mostly of ramshackle huts on mangrove stilts, the school was an impressive example of community development. Several concrete classrooms with real roofs, and teachers who spoke good English. A basketball court, and notice boards publicizing the progress of the school in standardized testing. We joined some local politicians in watching as the kids performed dances to popular music. It’s completely normal here for 5 year olds to dance like teenage pop stars. It’s quite entertaining!

Cockfighting is a very popular pastime here, and is experienced mostly from the morning cacophony of cockle doodles blasting out from all settlements we visit. Owners often have dozens of cockerels tied up outside their houses, just out of reach of each other. Typically at 2am a dog will bark at something, and that will set off the first cockerel, which is then followed by every other one in a two mile radius all announcing their presence. The process usually takes 10 minutes to die down until the next dog stirs them again at 2:30am. By the time that humans stir at sunrise, the cockledoodledoos are incessant and never ending. 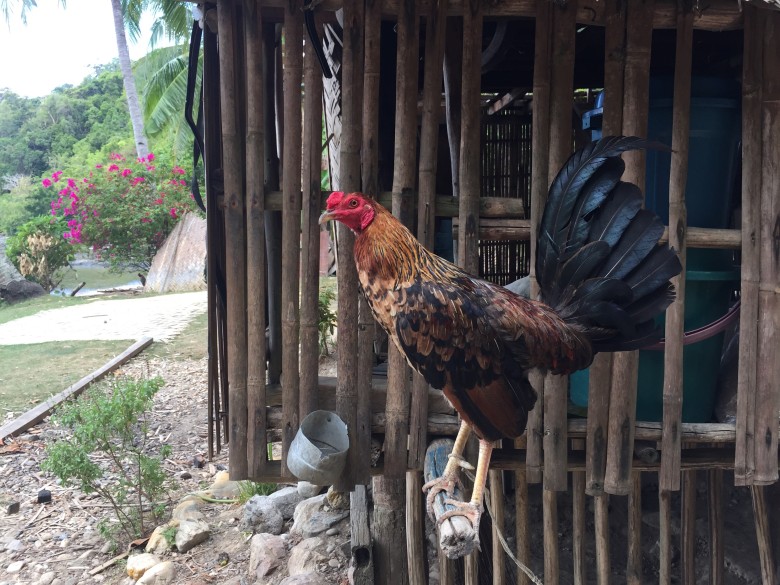 The men take great care of their birds, and they can often be found lovingly snuggling in their owners arms. They really are beautiful creatures, but their flaw seems to be that they can’t abide by others of their own kind in the same space. Hence, it creates great amusement for the men to attach razor blades to their feet and put them in a ring with another bird and bet on the outcome, which is usually quite terminal for one of the birds.

Apparently a bird only has to win a dozen or so fights in a row to progress up the ranks to being national champion and a prize of a million dollars. The lucky bird probably gets to live out its days making eggs with a bunch of hens, while the owner gets to spend the fortune.

Another popular pastime for the young men of Kiminawit is building speedboats. They construct fairly sophisticated hulls from plywood, with planing steps and light outriggers, around a standardized 15hp engine. Then they zip off around a course reaching speeds that seemed to be around 70mph. We sailed out just as they started a race, which got us some extra cheering, but it might have been shouting?

We sailed on deep into the sound to the village of Pancol. Supposedly there are a small cluster of endangered Irawaddy dolphins that live there, but we didn’t seem them. The village was very pleasant though, with neat houses, a couple well stocked Sari Sari stores which even had ice and cold beer, a luxury here! – Pancol also had a nice new concrete pier, partly financed by “the American People”. It was nice to get some value out of all my taxes.

The water changes as you go further into the sound. There was more plankton in the water, with lots of non-stinging jellyfish and salps. Coral still flourished, but less so than in the ocean, and it was possible to sail right up to beaches without having to worry about the fringing reef. There were many beaches, but vegetation extended right down to the high, high-tide line leaving very little room to pitch a tent. And then there were sandflies.

Sandflies, locally known as nik-niks have been an ever present nuisance in my time here, but where we camped in Malampaya sound, they were torrid. They are hard to see, and you don’t really notice them biting, but you pay the price a couple days later when the bites welt up and become infected. Tim and Audrey were smart to cover up, and escaped with minimal issues, but Shari looks like she caught the measles, and I just had to visit the doctor to sort out the infected welts developing on my leg.

The other price of cruising deep into the sound was a long upwind leg to get out and back to El Nido. Initially, I’d had much trouble getting Flash to tack, but I am now able to do it reliably, and keep her sailing 45 degrees to the wind.

We left the sound and short tacked the boat up through the Limancong channel – a narrow waterway lined with houses on stilts and crowded with large fishing boats. As we tacked back and forth, everyone seemed to stop what they were doing to watch – we got applause and hollering all along the way! It was perhaps some of the finest sailing I have done, and best of all, we didn’t hit anything, which with Flash, is an accomplishment indeed.

Linapacan Passage – Sailing up to Coron

Mid-April is a beautiful time to sail the Philippines. The strong Amihan winds are becoming lighter, the water is becoming clearer, and the sun is high high in the sky. With new crew, Margherita, May and Florent, we took Flash back up to Coron. It was a much easier trip than the trip down in…