After our first trial sail, we loaded up Flash in preparation for a day trip to one of the local beaches. With new crew volunteers picked up from travellers the bar, we set off for an adventure that didn’t last terribly long.

On our second tack, with Devin enjoying moving his weight out on the front crossbeam, two of the shrouds parted with a bang, and Dev was in the water. We picked him out ok and gingerly sailed back to the dock.

I’ve had a ton of support here, and the crew were eager to pitch in and help out with repair. Rei from Norway, with more years of life experience than the rest of us combined was the first to volunteer to go up the mast.

Well, it took a couple days to make a new part and get things ready, and then up Rei went on the harness. It took him a while and he came down speaking in a higher pitch, but the mast was well taken care of and that’s what was most important.

Our second outing was a short fishing trip round the corner. Elle managed to catch a Bisugo which promptly jumped out of her hands and swam away. The lads struck out, but we sailed home as the sun set and a fire burned in the hills above and that was pretty cool too.

I got a picture of me in my cowboy hat too.

With increasing confidence in the boat, our next trip was out to a beach on Coron island. We spent the morning loading up on supplies and then set out to Coron in the blazing sun. Hot as hell, and the wind died completely for half an hour, but fortunately the water was not far away and the sails cast some shade from the sun. 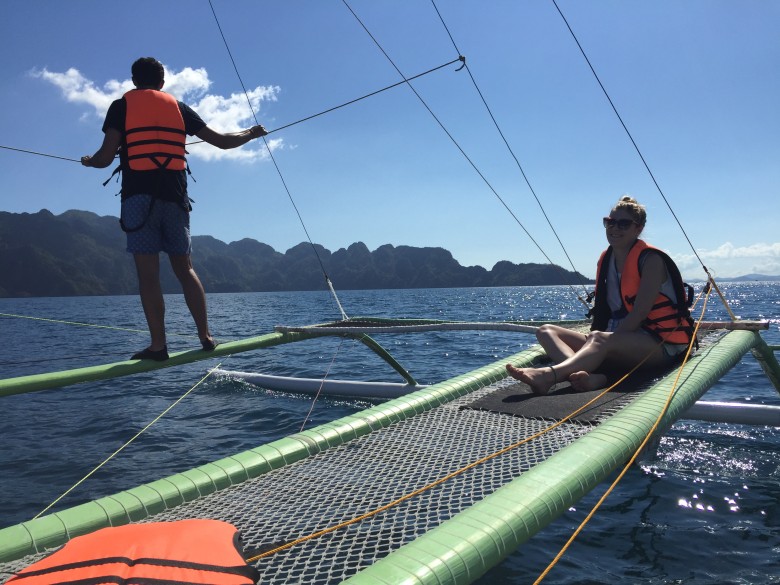 We made for a small little beach with a couple little beach huts all to ourselves. We cooked fish, drank beers and splashed in the turquoise water. 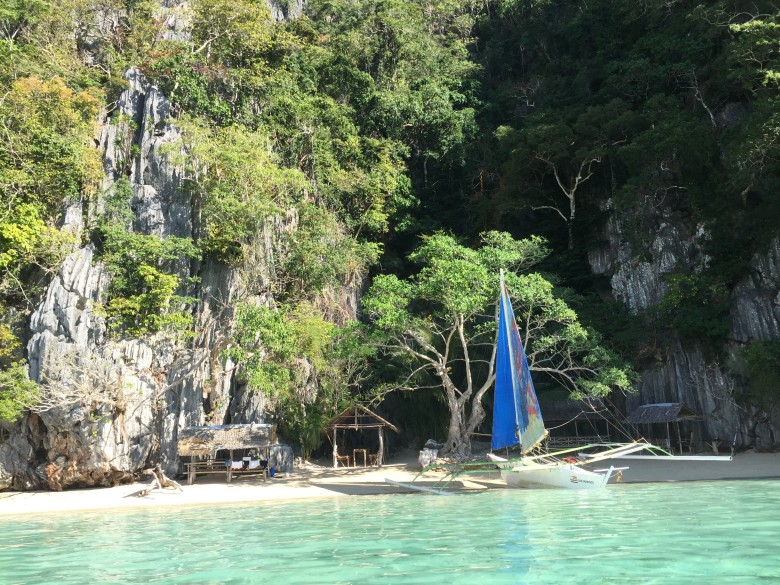 I got to do some snorkelling on the reef. A wall dropped off to 30 meters with great visibility and some massive caves. Yellow finned fishes schooled off the reef, and some shy squid darted in and out of sardines. It was truly magical. I didn’t bring a camera; just believe me.

We left late, and Esther sailed us back to Coron as night fell. Navigating at night is doubly tricky here: large expanses of reefs lie hidden in the darkness, while motor boats zip by in the darkness without lights – their truck engines clattering and giving plenty of warning of their approach. We were quiet and focused almost the whole way, passing silently in the evening airs.

And slowly but surely we made it back just fine. A truly awesome day.

West Busuanga and the Coron channel.

Brendan came out from SF to visit and with Alex, Susie and Rey we took Flash for some adventures to see the west side of the Coron channel. Our initial plan was to circumnavigate Busuanga and visit Apo Reef, but getting round the east side of Coron was hard with the strong Amihan winds. Still, we found…