The journey across the Tablas strait left us all dreadfully sunburned and exhausted. The San Miguel beer at Tambaron Island Resort gave us chance to assess the day. Oliver’s feet glowed red and swollen, I walked around like a penguin to keep my shorts from rubbing against my bright red thighs. We were all worn out and frayed.

So we took a rest day to recoup. This gave us all chance to do some reading, write a blog post, do some snorkelling in the clear blue waters surrounding the island. I slept up on the nets of the boat while the couples stayed in open cabanas. At night the strong Amihan winds blowed around the point to remind us that we were not home clear yet.

The next leg was to to sail down past Burancan point, the southern tip of Mindoro. This was still fairly exposed water. With early morning and late afternoon being the time to sail, we woke up early and pushed the boat off the beach and over the reef by 6:30am 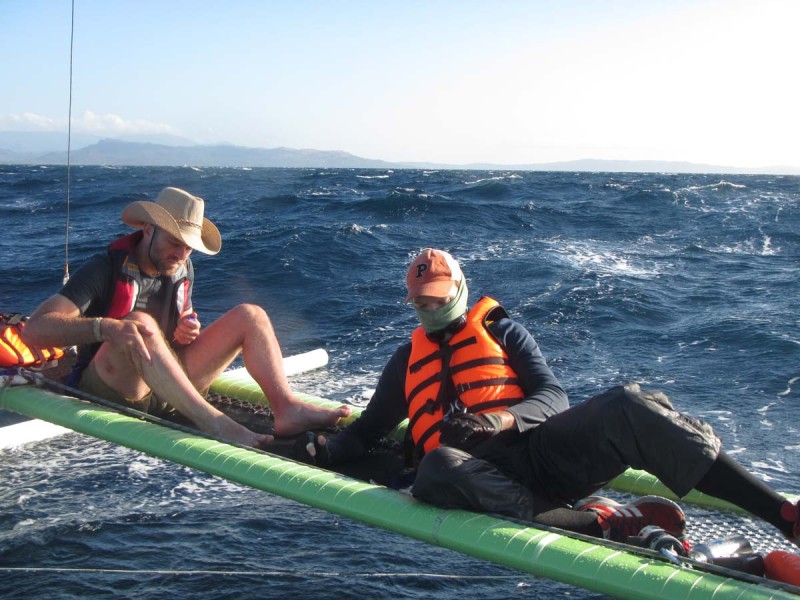 Initially we were excited about light winds, but as we discussed raising the main, a building wind silenced the debate. Slowly our speed over ground grew, with just the jib up we went from 5kts to 6, then 7. Water surged around, the wind blew stronger, the whitecaps grew larger and more ominous. On we went. A glance back over my shoulder was a chilling sight; dark water, breaking waves. But it was to late to turn back. We held on tight, our speed grew; 8kts, 9kts….. then 10kts as we surfed down waves.

All on the boat were quiet. Chris managed to get some Bob Marley going through his Bluetooth speaker which lightened the mood. “Don’t worry, ’bout a thing, cuz every little thing’s gonna be ok.” It was much needed reassurance.

Alibatan island, which had looked beautiful in photos, passed us to our port side…. a threatening pile of rocks and waves washing over reef.

The boat flew on, up and down waves. Sometimes the waves surfed over the boat, sometimes the boat surfed over the waves. The boat sank lower each time and we knew we had to bail, but dared not stop to turn the boat into wind. Then as one wave washed over the outriggers, Megan gave out a shout. “Man overboard!” I looked back to see Jonathan dragging behind on his tether. Every one of us were tied onto the boat for just this eventuality. I blew the jib sheets and rounded the boat up, Oliver leaped to his feet and hauled Jonathan back over the outrigger on the next wave. Jonathan sat back up, his cap still on, grinned then then laughed. We all laughed, and held on more tightly.

The point rapidly approached and it couldn’t come soon enough. Fortunatly at 9kts, it did. The cliffs became clearer, some beachy coves, fisherman’s huts. We flew by and then we were in the lee. The wind died, the water calmed down, and we were through.

There was a deep sigh of relief from all. We pulled the hatch and bailed water for five minutes. Jonathan took the helm and we sailed on along up the coast towards Ilin strait and towards San Jose. The wind blew at 10-15, and we continued to sail along under jib alone and made good time. Past seaweed farms, darkened fisherman on small pumpboats pulling lines, fish traps tended by people on bamboo floats, Ilin island, beautiful and seemingly empty of people.

We rounded the north tip of Ilin island, giving the yellow and turquoise water of the reef a wide bearth. The sun bore down apon us and we covered up our skin. Oliver hid under the mainsail.

At this point we ran into a problem…. where were we going?

We knew we needed to buy more food, and we also wanted to find an accompanying boat for the trip to Palawan. But where to find it? Landing in the large town of San Jose seemed unappealing, so we headed towards Ambulong island, but now we were stuck…. land in a village, or fight our way round the south tip of the island to a resort? We tried the latter, but the wind grew strong and we retreated, running back up the strait towards the village.

We had two choices… an upwind beach with a single house, or a downwind landing into the village which might have people able to help us. With the boat again low in the water, and our nerves frayed from the sun, we chose the latter. The wind blew strong and we approached the village at speed. Binoculars were passed around and we tried to judge a good place to land. There seemed to be some boats just beyond a small pier, and that seemed to be a good target. We ran perpendicular to the beach, and then when close turned our nose down and went for it.

Note to self… be a lot more careful when attempting a downwind landing on a reef fringed beach. The bottom rose up to meet us and once again coral heads flahsed by us. We blew the jib, but we had no way to slow down or stop, so we held on tight. Crunch over a coral head, grinding sounds along the hull and then free for a moment, then crunch again and to a stop. We jumped off to lighten the boat. Flash floated again, and then passed on into the inner reef and the beach. We held on, we pushed, we tried to paddle. It was all a bit embarrassing. Then finally we were on the beach, surrounded by children and grinning faces, our boat squeezed right in amongst the others, it’s nose almost poking into someone’s back yard.

We had arrived in Ambulong. And it turned out we couldn’t have chosen a better spot to land.

Guest post from Jonathan After we embarrassingly crash landed our way over the reef to the town of Ambulong, we pushed the boat up onto the beach and watched as a curious crowd slowly gathered. While our landing was surely a sight to see, our boat and gear (lots of it) were certainly out-of-the-ordinary for…