After nine months sitting in the water, I returned to find Flash in relatively good shape, but barnacles encrusted the hull and the paint was worn and faded in many places including the mast. There were a few other things that needed attention too!
Posted in Exploring the Philippines by Paraw
December 25, 2015 | 2

Flash has spent the summer at anchor and under the watchful eye of the fantastic people at the Discovery Island Resort. We weren’t really sure how it would fare, but I was delighted to come back and find Flash pulled up on the beach and waiting for my arrival. 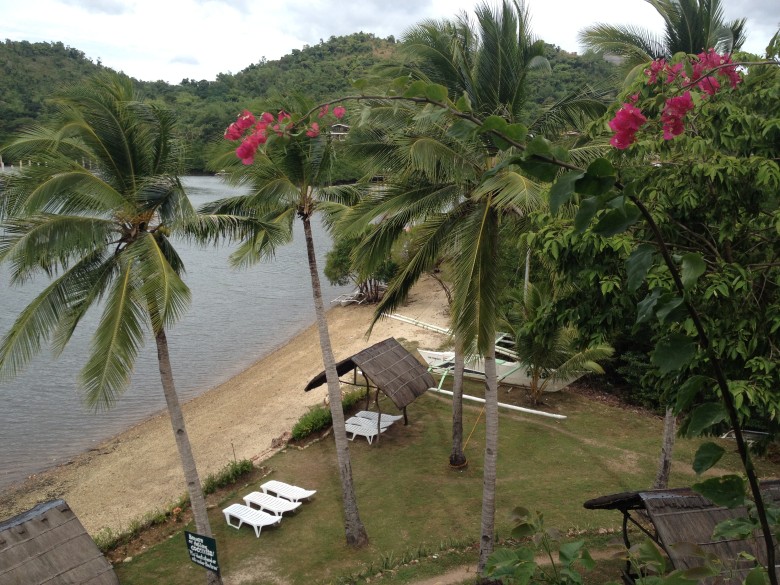 After nine months sitting in the water, the boat was in relatively good shape, but barnacles encrusted the hull and the paint was worn and faded in many places including the mast. A good sanding of the bottom and a touch up of paint was in order.

There were also a few other things that should be added to the menu too. In our last trip, we had broken one of the crossbeams and the boat was leaking water through the hatch. These would be smart things to sort out while at a good location, rather than risk problems down the road. 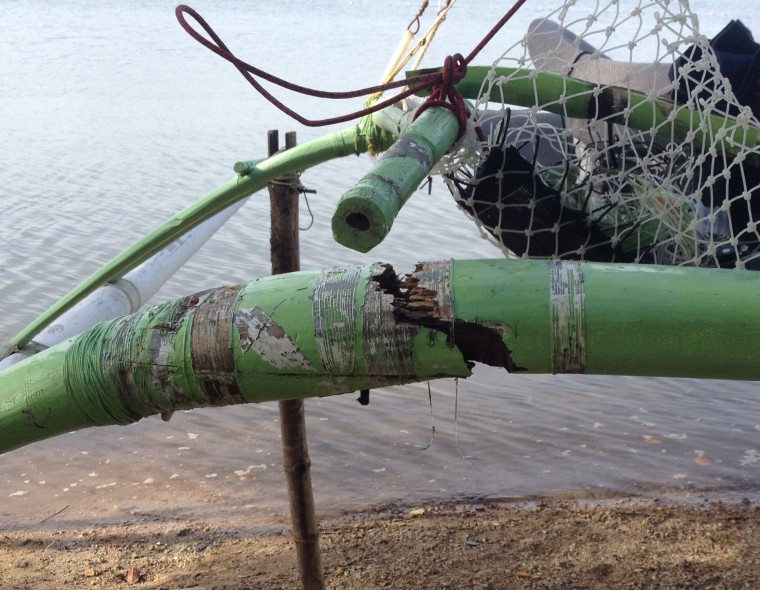 Closer inspection revealed the front crossbeam in a bad way: the crack at the elbow was a complete break, and large cracks also showed at the join with the hull. The quick and dirty repair is to ‘sister’ additional pieces to the broken ones, but given the stresses the front beam is subjected to, it’s a better idea to do this right.

And so I embarked on a task that was way bigger than planned:

Working on a boat at home is easy. I have tools, I know my way around, and there are stores with everything you could possibly need. Coron is a tiny little town, I have barely any tools, and have no idea what can be bought or how things are done.

But people are friendly and helpful, and it turns out there are a couple hardware stores with most of the basic stuff you would need when fixing a boat: paint, glue, simple tools. It’s fascinating to look at the comparative prices… I bought a really nice wooden hand plane for less than $5 and a quart of epoxy for the same. Both would have cost 5x more in the US.

And then there is labor. I put out a call for some extra help, and soon I had Jojo and Daryl helping me out for an embarrassingly low wage. We have been at it now for a couple days, although they do seem to have managed to turn a one day task of cleaning the bottom into a four day one requiring epoxy filler, a new coating, and a full repaint. Grrr. Still, they say if you want something done right, you should do it yourself, and in the end I was quite happy not to do that job!

I started working on the carpentry. Building a new hatch, and scarfing new joints on the forward outrigger. 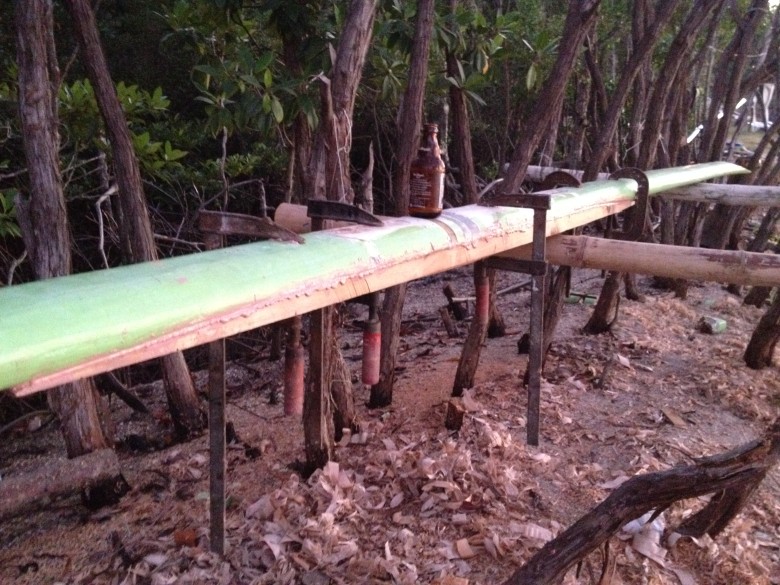 It’s hot here, and it’s a bit frustrating to be schlepping away on fixing a boat when all the other tourists are out enjoying diving and island hopping on other people’s boats. It’s insane really, but in a way it is quite special too: I’m learning to operate in another country; I’m making working relationships with people who live here, and I’m having to solve problems. This takes you off the beaten path and gives a very different traveling experience. The lumber yard three miles out of town might not be much of an attraction compared to the ‘coral gardens’ or the ‘barracuda lake’ but it was every bit as interesting to me.

Boat projects always take longer than you think: You start taking undoing lines to investigate problems, the crack is bigger than expected so you pull it apart, then you see another crack and before you know it, the boat is in pieces. You spend half a day going to the hardware store, only to get back and twenty minutes later realize you need to go back to the hardware store again. The sun blazes down, you get thirsty, you stub your toe on a mangrove stump, and then clothesline your neck on the wire shrouds.

But at the end of the day, when the sun starts to go down, you can pop a beer and look at the small accomplishments of the day, and things feel a bit better. And that was how I spent my Christmas. 8am to 5pm, every day for 12 days.

And eventually it had to end, and fortunately it did.

The crossbeam is now repaired :

There is a new rear hatch, which will help keep the boat from sinking, new shelves for the interior, and a flashy new paintjob!

Life was made easier working with Daryl who did much of the painting, and Jackson who joined mid-way to help out with the carpentry.

Boatbuilding in the Philippines is quite different from back home. When I asked Jackson where I could find a bandsaw to cut out the shape for the outrigger extension, he responded with ‘no saw here, but I can cut’ – He then pulled out his machete and went to work. Twenty minutes of hacking later, an unwieldy 4″ x 6″ x 50″ chunk of wood was looking like I wanted it.

The boats here are lashed together with monofilament fishing line. Jackson showed me the ‘ropes’ so to speak and we spent a good day re-lashing the outrigger back into place until my fingers were raw.

And eventually, bit by bit the tasks were all crossed off. Flash was ready. I rounded up some adventurous souls at the bar, told them there was no risk at all of the boat sinking or crashing into a reef, and as the wind died at sunset, we pushed off for a trial sail! Yippee!

Boat projects always take longer than you think: You start taking undoing lines to investigate problems, the crack is bigger than expected so you pull it apart, then you see another crack and before you know it, the boat is in pieces. You spend half a day going to the hardware store, only to get…