After we embarrassingly crash landed our way over the reef to the town of Ambulong, we pushed the boat up onto the beach and watched as a curious crowd slowly gathered. While our landing was surely a sight to see, our boat and gear (lots of it) were certainly out-of-the-ordinary for an afternoon in Ambulong.

As with most of our other beach landings, one of the locals — in this case, a woman named Edna — came forward to meet us and check if we needed any assistance. Understandably, given our sloppy beach landing, she was concerned that we needed help. At the same time, a local man named Bobot began helping to secure the boat on the beach — he produced two bamboo poles to stabilize the boat from tipping left/right and brought a large log to put beneath the stern to keep it elevated above the rising tide. We soon learned that Bobot and Enda are married, and it turns out that we managed to land our boat directly in front of their home! We didn’t know it at the time, but landing the boat in their back yard was an enormous stroke of luck that paid dividends for many days to come.

After hanging our wet clothes, Edna offered to lead a tour through town. I decided to stay behind and continue to organize the boat, but most of our team went off with Edna to see Ambulong town. 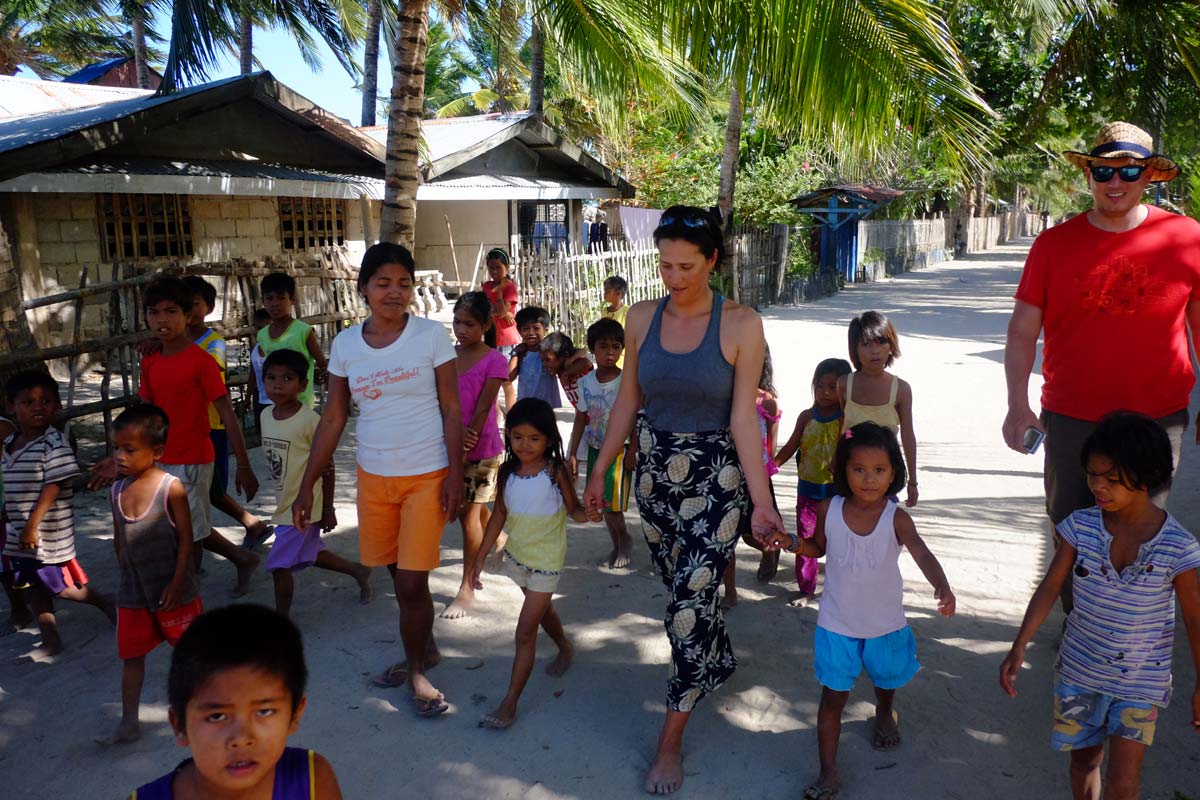 While the group was touring the village, I had a chance to talk more with Bobot and to learn more about his life in Ambulong. I was very interested to learn that there is no fresh water source in the village. Instead, there is a spring in the mountain at the northern end of the island. It wasn’t clear to me why the village was located so far from the water source, but Bobot has made a business of filling water jugs at the spring and ferrying them back to the village on his bamboo raft. He makes this impressive round trip journey every other day, taking 5 or 6 hours to guiding the raft to/from the spring and refill the jugs. I also learned that he is the local charcoal supplier — he buys bulk quantities of charcoal from another island and then re-packs and sells it in small bags (each 5-peso bag appears to be enough for cooking a single meal). I was impressed with the entrepreneurial spriit that seemed to be a major part of Bobot’s and Edna’s life on Ambulong.

When the group returned from the tour, Bobot quickly emerged with a cluster of 6 coconuts and proceeded to open one for each of us. For this show, a large crowd of (mostly) children gathered in stadium-seating fashion to watch the show of us slurping up fresh coconut water. The specatcle continued as Oliver made turks-head bracelets for one of the children and we pulled out the chart to discuss our trip with Bobot. As we had seen earlier in the trip, the names of islands on our chart often do not match the local names so it was quite interesting to discuss our route with the Ambulong people and hear their perspective on the islands and route that we have taken and plan yet to take. 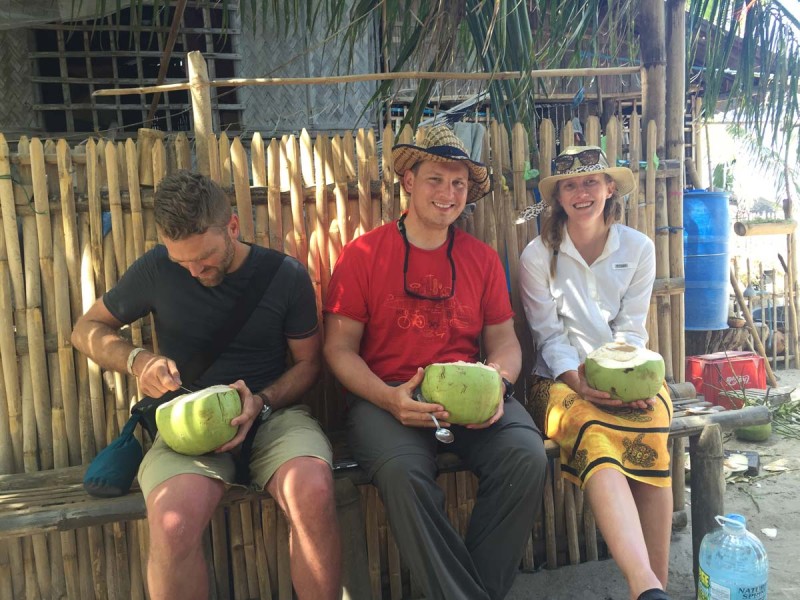 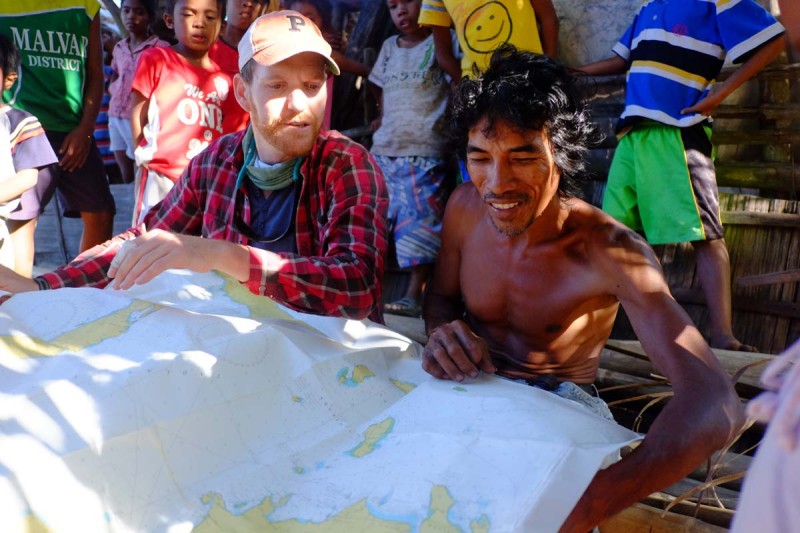 Each time we land on a beach and receive a fantastic welcome, I find myself asking whether we are just extremely lucky or if everybody on these islands is supremely freindly and welcoming. On our first beach landing — at night on Sibolon island — we were given a pile of coconuts and were brought a table to use for our dinner on the beach. When landing on the small island of Libagao with a broken buk-buk (outrigger), we were presented with a perfect piece of wood to make the repair we needed and led to a shaded hut near the beach to escape the blazing mid-day sun. And the landing on Ambulong put the icing on the cake, when Bobot and Edna insisted that we come eat dinner with them and invited us to sleep in their back yard — after they had spent an entire afternoon making us feel at home in their village and surely taking time away from other important tasks in their lives. 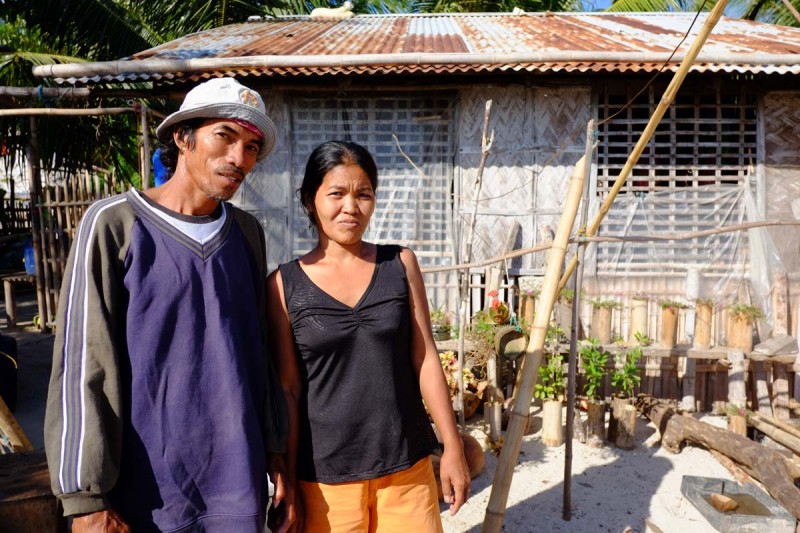 The evening was my favorite part of the day on Ambulong, as we prepared a meal with Edna and Bobot. We bought fish from a local fisherman, who was actually fishing from a small paraw similar in design to Flash but much smaller. Marissa and Edna proceeded to de-scale, gut, and cook the fish, and Chris and I set to work on making a lentil, carrot, and tomato stew. Edna cooked the fish over charcoal on a small concrete stove that seemed to be the cooking surface of choice on Ambulong as well as on other islands we had seen along the way (and also on many of the fishin boats). It was a remarkably simple and effective stove that I would like to replicate someday. We did our cooking on our MSR camping stove, which drew a crowd of spectators from beyond the fence. Edna also produced a plate of small fried fish that were absolutely delicious, and we all enjoyed a great dinner in the backyard of Edna and Bobot. 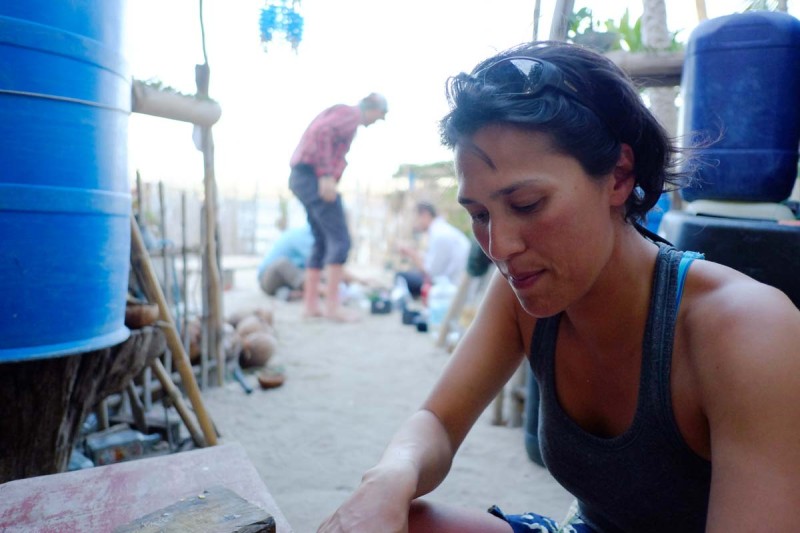 I went to sleep that night on Ambulong feeling very lucky to have landed in front of Bobot’s and Edna’s house and also with a feeling that we probably would have received the same welcome if we had landed anywhere else on that beach. 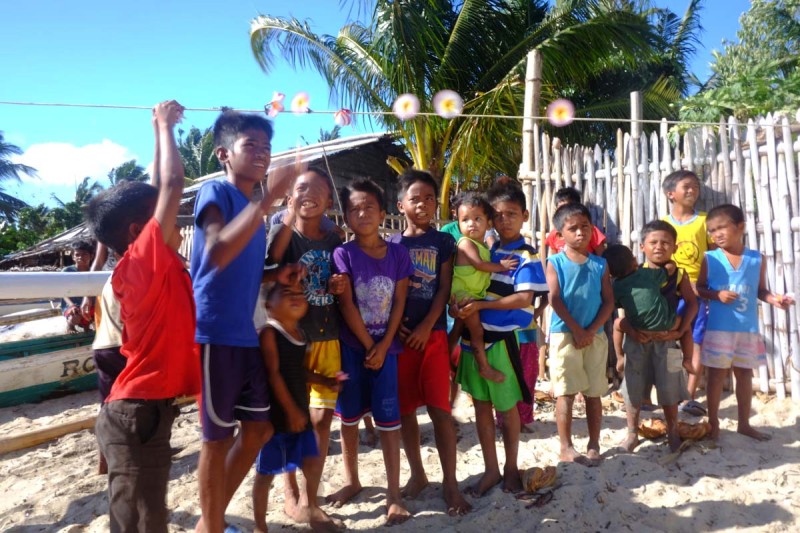 After a night in Ambulong and a rest-day to provision in San Jose, we were ready to attempt our longest open water passage: the crossing to Palawan. We set off early at 5am with light winds out of the east, it proved to be a fair and uneventful crossing. The wind built slowly after sunrise…